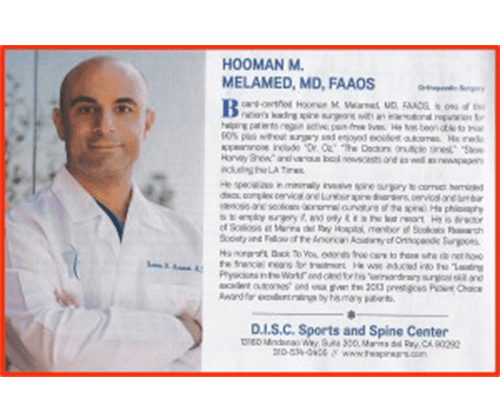 Dr. Hooman M. Melamed was recently recognized for his work in the January edition of Los Angeles magazine. His extreme dedication and care for his patients, as well as his vast amount of expertise on orthopedic spine surgery, was highlighted by the magazine.

Dr. Melamed was regarded as one of the leading spine doctors in the United States, due to his cutting-edge procedures, specifically his expertise in minimally invasive spine surgery. His patients’ health and interests are his top priority, as he resorts to surgery only when absolutely necessary. His ground-breaking work on orthopedic spine surgery has landed him numerous appearances on shows, such as, “The Doctors” and “Dr. Oz”, where he has been able to share his knowledge about spine-related disorders and their treatment, to a broader audience.

In addition to his knowledge of orthopedic surgery, he was also praised for his non-profit work. His non-profit, Back To You, offers treatment to those who otherwise could not afford it, due to financial limitations. He was inducted to the “Leading Physicians in the World” for his revolutionary work, and in 2013, was awarded the prestigious Patient Choice Award for his wonderful ratings among patients.